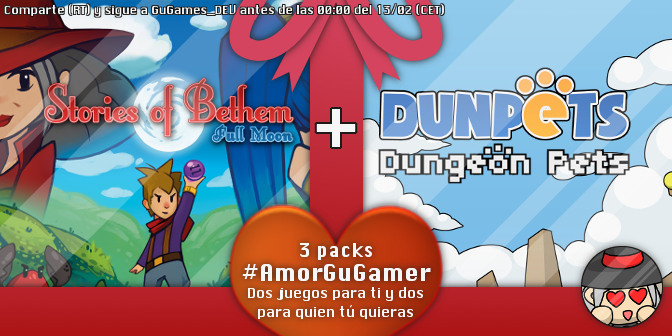 We're making a draw with three packs of four download codes for GuGames DEV games valued at 18€; two for you and two for who you want.

We want to contribute to this feeling flows around the world and we'll give three packs consist on two Stories of Bethem: Full Moon copies for Steam (Windows, Mac OS X, Ubuntu) and two of Dungeon pets PRO (Android) in each one.

One of them for you and one of them to play with whoever you want.

The results will be published on the same day. Prizes will be also awarded on Twitter that day.

Don't forget you can take a look at the attached links of this news to know more about the drawn games.

Make someone happy with this present for February 14!